Researchers at the INM have demonstrated the performance of their technology in endurance tests: Even after 500,000 testing cycles the dry adhesive structures work reliable. Thus, the next step towards industrial application is done.

Components with highly sensitive surfaces are used in automotive, semiconductor, display and optical technologies. During production, these parts have to be handled repeatedly by pick-and-place processes. The proprietary Gecomer® principle reduces the risk of surface contamination with residues, and of mechanical damage due to gripping. In their latest version, researchers at the Leibniz Institute for New Materials (INM) have now demonstrated the performance of their technology in endurance tests: Even after 500,000 testing cycles the dry adhesive structures work reliable. Thus, the next step towards industrial application is done.

The researchers will be presenting their results at this year’s Hannover Messe in hall 2 at the stand B46.

“Artificially produced microscopic pillars, so-called gecko structures, adhere to various items. By manipulating these pillars, the adhesion can be switched on and off. Thus, items can be lifted and released quickly and precisely,” Karsten Moh from INM explains. “Our new materials add a new dimension to the handling of heavy, sensitive and very small devices, even in vacuum,” says Moh. “With the currently developed adhesion system, adhesive forces of more than eight Newton per square centimeter can be achieved. In our tests, the system has proved successful even after 500,000 cycles,” the technology expert Moh says. Now, the system is also usable for industrial applications. Even slightly rough surfaces can be handled reliably.

Your Experts at INM
Picture 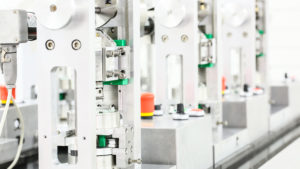