All over the world, hydrogen is seen as a beacon of hope for the energy transition. But to produce it on an industrial scale, seawater is needed. However, its desalination has so far only been possible with the use of large amounts of energy. Energy experts Yuan Zhang and Volker Presser have found a way to extract salt directly from seawater using a fuel cell that was previously “only” used to generate electricity. This could revolutionize the production of hydrogen on a large scaleThey published their method in the renowned journal Cell Reports Physical Science.

Technically, the shift to a hydrogen economy is a cake walk: of the roughly 1.4 billion cubic kilometers of water on Earth (that’s 1,400,000,000,000,000 or 1,400 trillion liters), the overwhelming majority is readily accessible as salt water in the oceans and, it’s probably no understatement to say, is available in sufficient quantities to supply humanity with energy for a long time. This virtually inexhaustible resource could therefore be used to produce as much hydrogen as is needed to generate electricity. The “green” energy transition away from fossil fuels would be achieved.

The reason that no one has done this yet is due to a small but significant snag: “Today’s electrolysis systems cannot produce hydrogen from saline water,” Volker Presser puts it in a nutshell. The professor of Energy Materials at Saarland University and head of the Energy Materials program area at INM – Leibniz Institute for New Materials is one of the leading experts in the field of energy storage. His work, particularly in the field of electrochemistry, has received international attention in high-impact journals.

Together with his doctoral student Yuan Zhang, he has now succeeded in taking a major step toward “energy from seawater” – at least on an experimental scale. Previous systems provide for hydrogen to be produced for fuel cells by first using a great deal of energy to produce deionized (i.e., desalinated) water from seawater, and then using this treated water to produce hydrogen in return. This would be the only way to produce enough hydrogen without drastically reducing the limited, valuable freshwater supplies. However, this process is not truly sustainable unless the energy for desalination comes entirely from renewable sources. “Yuan Zhang now had a revolutionary idea: we simply use the fuel cell itself to desalinate the seawater and then obtain fresh water, which can then be used in the fuel cell to produce hydrogen,” said energy expert Presser.

To do this, he and his doctoral student came up with a simple experimental setup that anyone can follow: Using a fuel cell for school use, they have built a system that ultimately produces fresh water from the starting material, salt water, and also produces electricity and heat, which in turn can be invested in the production of hydrogen. The salt present in the salt water (mainly NaCl, common salt) is forced to dissolve its bond with the water by the addition of hydrogen and oxygen. In addition to the drinking water that is then produced (which can subsequently be used for the production of hydrogen), an acid (in particular HCl; hydrochloric acid) and a base (in particular NaOH, sodium hydroxide) are produced as intermediate products. “We also generate electricity at this point, which we can use further,” says Volker Presser. When the acid and the base are brought together again at the end, they also generate heat, which can then be used further.

“So now we can build a module out of any fuel cell that not only generates electricity, but also produces drinking water quite incidentally. This can then also be used for hydrogen production’. You just need hydrogen for this, but you can produce it ‘green’ via electrolysis with ‘power to gas’,” says Volker Presser, explaining the potential value of the new technology approach, which could be used on a large scale in the future. 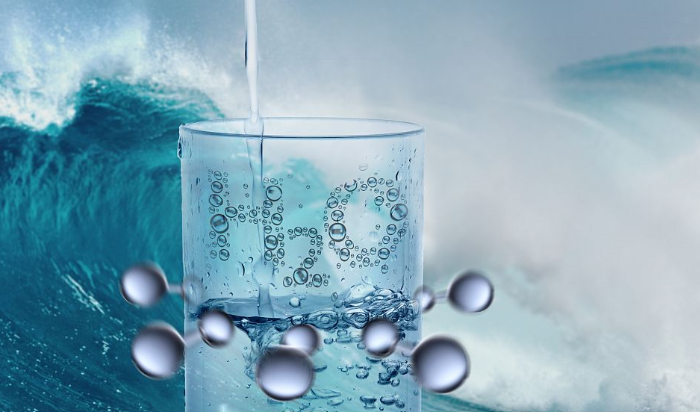