Since January 1, 2021, the junior research group “Electrofluids” at INM – Leibniz Institute for New Materials in Saarbrücken has been investigating unusual electrically conductive materials. Dr. Lola González-García, head of the new group, was awarded a Starting Grant of 1.5 million Euros by the European Research Council (ERC) last year. Over the next five years, she and her team at INM will use the grant to develop current-conducting “electrofluids” that can be used as an alternative to solid materials in soft electronic components. The ERC Starting Grants support promising young scientists at the beginning of their careers.

Unlike their metal counterparts, soft robots are said to be particularly sensitive. Rigid circuits and unflexible cables limit this ability. Electrically conductive fluids could provide a remedy, but mercury is expensive and also toxic. The idea behind the novel electrofluids: Adding tiny particles of a current-conducting material to a liquid, at such a high concentration that there are always electrically conductive contacts. “It’s a bit like in toothpaste,” says Lola González-García. “It’s quite solid in the tube, but when you squeeze it out, it becomes liquid. That’s because of the high percentage of solid particles.” If you take metal or carbon as particles, you get an electrofluid. “Electrofluids are dynamic electrical conductors,” she continues. “When at rest, the current-conducting particles are in contact with their neighboring particles. When the electrofluid flows, new contacts are constantly being made, so overall it is constantly conducting.” Cables with an electrofluid as a conductive core instead of a copper wire would thus be highly adaptable and could be stretched and deformed at will.

These properties make electrofluids interesting for “soft” electronics. Well-known examples include so-called wearables, electronics worn on the human body, such as smartwatches and fitness bracelets. “Thanks to electrofluids, we can make these kinds of components even softer,” González-García explains.

For the INM research group, the sustainability of the new material is of great importance. For this reason, it is already looking at methods of recovering the electrofluids and recycling their components during the development phase. The INM researcher is convinced: “Scientists who develop new materials have an obligation to consider at the same time what to do with these materials at the end of their useful life.”

Dr. Lola González-García received her diploma in chemistry in 2007 and her master’s degree in materials science in 2009 from the University of Seville, Spain. She continued her PhD on porous nanostructured thin films and their integration in optical devices at the Institute of Materials Science of Seville (ICMS), graduating with honors in 2013. From 2014 to 2020, she worked at INM in the Structure Formation group under the supervision of Prof. Tobias Kraus, most recently as his deputy. Since January 2021, she has been leading the junior research group Electrofluids at INM. 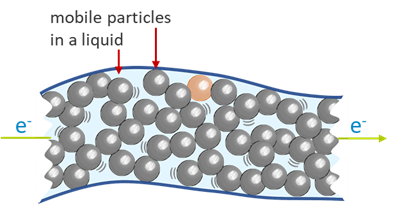